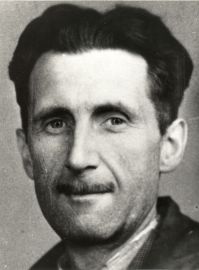 The ubiquity of George Orwell in British and American culture has much to do with his being the secular saint of journalists. If the media was run by Mormons, Joseph Smith would be as famous. He embodies their romantic illusions about themselves: truth-telling in his opposition to Hitler, Stalin and empire; iconoclastic in his struggles with the far left; plain-speaking in his opposition to obscurantist prose; romantic in his tireless and often unrewarding craft.

This totemic Orwell is unlike the real thing. I suspect that if he somehow underwent reincarnation he would not be impressed by his modern admirers. Indeed, I sometimes wonder just how much people have read of him.

Claiming Orwell for one’s ideological tribe is a ubiquitous phenomenon that I will not indulge in. Orwell was a socialist and I am not. Orwell was anti-Catholic and I am not. Orwell was a great lover of tea and I can’t stand the stuff. His judgement is overrated by contemporary critics, who skirt round the unreflective left-wing anti-war position that Orwell maintained into the late months of 1939. The loneliness of his anti-communism has been overstated. Russell and Muggeridge had exposed the Soviets long before and Crossman, Koestler and others were just as energetic. “Politics and the English Language” can be arbitary and dogmatic, and is much-admired by people whose “down-to-earth” writing is glib and evasive.

Still, being overrated does not make one less admirable, and there is much about Orwell that should be admired. He was self-critical enough to change his mind, and changed it well. He was a man of broad sympathies and human sensibilities. He was an independent and courageous intellectual. He wrote clearly, cleverly and often beautifully. What I also find interesting about Orwell is something that is absent from his defanged, domesticated reputation: his critique of modernity.

Orwell’s patriotism can be caricatured as one of cricket, country lanes and anti-communism. It ran deeper than that. True, he was no flag-waver or even God-save-the-Queener, but he appreciated the deep roots of patriotism. His latter-day admirers tend to be internationalists: hawkish in their attitude towards foreign policy and liberal with regards to immigration and trade. It is true that Orwell was no tub-thumping nationalist. He defended migrants and observed, accurately, that Britain could not exist in total isolation. But can his admirers have read him, in “England Your England”, observe that, “Patriotism is usually stronger than class-hatred, and always stronger than any kind of internationalism”? Can they have appreciated his sensible warning that while English insularity can be regrettable, “[those] who have tried to break it down have generally done more harm than good”.

Orwell fits uneasily with modern social mores. He was a masculine figure – less in his life, where he was often awkward around men and worse around women, than in his prose, which he larded with insults of “gutless” men. He distrusted homosexuals. He disliked feminists. He was against abortion and opposed to birth control.

There have been two excuses made by Orwell’s liberal admirers. One is that he was “of his time”, which, of course, he was, but he was he was also against his time as a progressive intellectual. It was notable if not yet heretical to lampoon the homosexuality of Auden, Isherwood and Spender, who Orwell dismissed as the “nancy poets”, and the woman’s rights campaigning of the likes of Lady Rhondda, who he saw “riding us like succubi in the name of Progress”.

Another dismissal of Orwell’s reactionary views is that they were informed by base physical impulses. (Christopher Hitchens referred to “the shudder generated by homosexuality”.) Orwell’s emphasis on masculinity was, I suspect, informed by his neuroses. He was sterile, and awkward with women: making, after the death of his wife Eileen O’Shaughnessy, a series of sad, doomed proposals to acquaintances before marrying the opportunistic Sonia Brownell. But he did adopt a son and raise him with a great deal of love, and his first marriage was successful if sometimes fraught. To reduce his opinions to his psyche is condescending and unjustified. They did not, of course, amount to a serious, well-articulated social conservatism but they were in line with his sincere if not always incisive critique of the “softness” of modern life. He was anxious about declining birth rates, long before they reached the startling depths of our generations. He feared the pacifying effects of consumerism. He worried that English people (and especially English socialists) would become too weak to resist oppression. In the union of capitalist economics and cultural liberalism he saw civilisational fragility and decay.

Perhaps Orwell’s most coherent, compelling critique of “progress” was his 1939 novel Coming Up for Air. It is best known for presaging World War Two but its pessimism was much deeper and broader than that. It is notable that George Bowling, its pathetic protagonist, is an insurance salesman: a decent, safe and yet rather undignified career. He is bullied by his wife and annoyed by his children, and feels uncomfortably fat around the middle. Against this image of middle class emasculation, in Orwell’s work, one finds admiring portraits of coal miners: “splendid men”, with “noble bodies”, like “iron hammered iron statues”. He did not idealise the conditions of their work, of course, but, as a man who was himself, it seems, happiest when he was caring for animals, growing vegetables or almost killing himself piloting a boat around Jura, he valued honest, tough, masculine toil and disliked the effects of bourgeois marketing and managerial endeavours on a man.

Orwell was never quite convinced by the industrial revolution; unsurprising, given his attachment to wild, wind-swept rural hermitages, and the urban Hell he painted in 1984. He was attached to the natural and the local. In Coming Up for Air, he prophesied the death of traditional provincial communities, with everything gentrified, cemented over or, as in the case of poor old Mr Bowling’s childhood pond, turned into a rubbish dump.

Orwell would have liked some things about modernity, as do all but the most preposterous reactionaries. It is, for example, an excellent thing that tuberculosis – the painful, debilitating, deadly illness that claimed his life – is so much easier to cure and avoid. It would, I think, astonish him that Europe evaded twin terrors of totalitarianism and war. But in our division, our environmental devastation and our complacence, feebleness and apathy he would have found much to despise.

So? Few men would be glad to appear in future worlds. They are attached to their own. Well, again, I would not claim Orwell as a consistent or even especially profound advocate of social conservatism. He was often impressionistic and impulsive in his thought. Still, if one accepts his clear-sightedness on some matters, one should take care before rejecting his opinions on others. Liberals, left-wing hawks and mainstream conservatives have wallowed complacently in the post-89 consensus, and it is ironic that perhaps their greatest hero expressed, seventy years ago, concerns about progressive hubris. Besides, caricaturing people from the past, in the name of sanctifying or demonising them, seems wrong. We would, I think, dislike our successors caricaturing us, however the world might look seventy years from now.

I am a writer of stories and poems - published by Every Day Fiction, The London Journal of Fiction, 365 Tomorrows and Det Poetiske Bureau - and a columnist for Quillette, Areo and Bombs & Dollars.
View all posts by bsixsmith →
This entry was posted in Books, Conservatism, History, Literature. Bookmark the permalink.

2 Responses to Orwell Against Modernity…